The System Is Not Broken, It Was Built This Way

When picturing food insecurity, it is not always the cliché penny pinching to afford Chef Boyardee; it’s harshly nuanced, experienced otherwise depending on one’s circumstance.

When picturing food insecurity, it is not always the cliché penny pinching to afford Chef Boyardee; it’s harshly nuanced, experienced otherwise depending on one’s circumstance. Food insecurity occurs as someone waiting in an obscene line in the rampant sun after having walked a mile with their child in arm to then walk back with canned goods and rice weighing on their shoulders. It manifests as an individual having to commute further distances for a meal on the days that their local food pantry is closed, usually utilizing public transportation, increasing their risk of assault, even more so if they have a disability, aren’t English speaking, are black, trans, or elderly. It’s a person wanting to make conscious decisions regarding their diet and not having the ability to because their nearest market is too costly or far.

When these experiences are measured, the culprit is consistently food deserts. Food deserts—in the United States—being hubs of fast-food chains alike and corner bodegas, acting as the sole source of food for miles to come, devoid of affordable healthy options. This phenomenon dates to the Civil Rights movement when white flight occurred, which is the mass migration of white communities leaving racially diverse communities, divesting from them and usually leaving them in a state of economic disarray.

Leah Penniman, author and co-founder of Soul Fire Farms in upstate New York, where she currently combats food insecurity, phrases it as food apartheid, suggesting that it is a societal issue we actively chose not to address and have enforced throughout history. Jacqueline Bediako, black feminist organizer, behavioral analyst and educator based out of Brooklyn, further acknowledges food apartheid, “as a relentless social construct that devalues human beings & assumes that people are unworthy of having access to nutritious food(s).” She goes on to state, “It affects people of all races, including poor white people, although Black and brown people are affected disproportionately. Under these conditions which are overtly abusive whole communities are geographically and economically isolated from healthy food.” For this reason, we must admit to the systematic violence that is held against targeted groups of people, specifically those who are black, brown, or have immigrated to the US.

With violence often being interpreted as solely physical acts of harm, it mitigates the expression as being synonymous with oppression. When entire demographics of people have experienced oppression due to a long history of racism and displacement, we must consider how that qualifies as violence towards their past, present, and future; particularly within a socio-economic context and its implications toward their physical/mental health. When we do not, it encourages people who are comfortably food secure to invest in the idea that food insecurity is deserving, is earned, and is less harmful than it presents itself, truly embodying American Exceptionalism. This ultimately dwindles the involvement of government institutions and health providers aiding in this apartheid, increasing the number of neighborhoods without a proper grocery store in sight, leading to saturated pockets of fast-food franchises, which are 2.5x more likely to appear in low-income neighborhoods. This results in higher rates of diet-related illnesses like diabetes, hypertension, hypercholesterolemia, and heart-disease, which can obviously be treated through better diets, but where are the resources to enable that? Instead of health institutions begging these questions, they too often enforce the same rhetoric that abates efforts to tackle the source of these epidemics.

Let’s throw it back to a brief example from 2018, when the prestigious Dr. Mercedes R. Carnethon and her team at Northwestern University Feinberg School of Medicine analyzed data collected from more than 4,200 participants in the Coronary Artery Risk Development in Young Adults study in affiliation with the NIH’s National Heart, Lung, and Blood Institute, where they assessed risk factors for diabetes for 30+ years, gathering both personal and family medical history, having evaluated data like smoking, drinking, and dieting habits. The participants were between the ages of 18-30, from cities such as Birmingham, AL, Chicago, IL, Minneapolis, MN, and Oakland, CA, with about 49% of participants being black and 54% being specifically black women. Participants’ information pertaining to their neighborhoods, education level, ability to pay bills, and employment status throughout young adulthood were also factored into the study. Throughout the study, it was “found that the chance of developed diabetes was significantly higher for black adults than for white adults (about 66 more cases of diabetes per 1,000 people). The greatest difference was between black women and white women.” Although the researchers evaluated social determinants like income, education levels, and employment status, they found that biological risk factors accounted for most of the stark divide in the rate of diabetes between black and white folks. Leading Dr. Carnethon to conclude that “obesity is driving these differences… We now know there is no mystery to these higher rates.” What Dr. Carnethon and her team failed to emphasize was the blatant connection between the rates of adiposity and social circumstances. Maybe their neighborhood or poverty rates didn’t directly cause the influx in adiposity, but it sure did induce the probable daily runs to McDonalds for a 69-cent cheeseburger because it was the most effective means of eating, of surviving; biological circumstance usually does not exist without social circumstance. When people are in constant exposure to adverse environments, it’s going to result in equally adverse health determinants, attributing to the 2.6x likelihood of a middle-aged Black American having diabetes as opposed to a White American. And that’s just scratching the surface.

So, how do we fix this? The act of eradicating food apartheid and achieving food justice, allowing nutritiously dense meals to be consumed abundantly and freely as opposed to addictive processed foods high in sodium and sugar, despite your income or neighborhood, is one that can be achieved. Despite government institutions providing blasé subsidy programs like SNAP or WIC, it’s community-based grassroot efforts that we witness consistently aligning the narrative to that of food justice with the rise of community gardens, sliding-scale CSA programs and farmers markets, community fridges, recurring stipends granted to individuals for fruits and vegetables, crop swaps, seed sharing, and co-op grocery stores located in areas that have been consistently underrepresented; a system that moves in the direction of genuine autonomy and empowerment built on the fundamentals of access to healthy food/living as a basic human right. However, this cannot conclude our efforts and should simply serve as the example for local elected officials, health providers, and private lucrative organizations to take note and work together, providing better, more expansive, comprehensive plans to that of these community’s needs, shifting the paradigms in which they are confined to. We need equity, which can only be achieved by thinking bigger than one-dimensional solutions for a radically complex problem that we as a nation have yet to formally get to the root of. 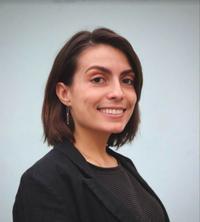 Gabriela Cimadevilla (she/her/ella) earned her BA in Sustainability & the Environment from Florida International University, where she intersected her dedication to environmental science and social justice. Through her experiences, she grew more as an activist, becoming a community organizer, and eventually working as the Nutrition Coordinator with Monarch Health Services, Inc.”

FOOD DESERTS- THE PEOPLE BEHIND THE NUMBERS – FOOD INSECURITY (wordpress.com)